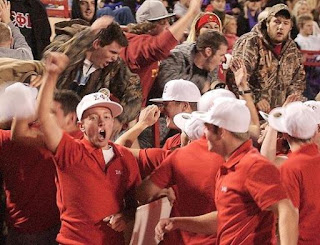 Wes Moore, left, wearing white cap, celebrates with his Sigma Phi Epsilon fraternity brothers and supporters Thursday evening after their performance during Yell Like Hell at Carnie Smith Stadium. They placed first in the men's competition.

And from the looks of it, the Sig Eps and Tri-Sigs were cheering for each other. Both loudly supported each other before, during and after their routines.

Dustin Lang, a sophomore technology management major from Nevada, Mo., who was part of the victorious Sig Ep squad, said taking home the trophy was well worth all the hard work he and his fellow fraternity brothers out in.

"It's amazing," he said. "All of the hard work we put into it, it was very well worth it."

Lang's group managed to tie in "Wheel of Fortune," "Riverdance," country music, "Who Wants to Be a Millionaire," and the required cheer.

PSU groups take part in 'Yell Like Hell' | The Morning Sun
Posted by Wordjunky at 10:45 PM
Email ThisBlogThis!Share to TwitterShare to FacebookShare to Pinterest