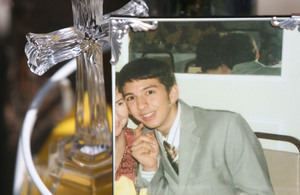 A portrait and a cross are among the objects at memorial for La Salle junior Steven Amarillo Jr., who was killed early Sunday on Ridge Avenue.

...police are now probing whether La Salle University student Steven Amarillo Jr., killed by a cab in the same 4800 block of Ridge Avenue early Sunday, had been with friends who fled the scene before police arrived.

"There's some indication that he had companions with him, but we're still looking for them," Sgt. Albert Gramlich,

Posted by Wordjunky at 11:13 PM
Email ThisBlogThis!Share to TwitterShare to FacebookShare to Pinterest