You gotta have 'pull' if you want to win. 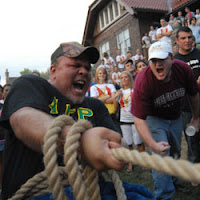 Members of Alpha Gamma Rho cheer on one of their teammates during Wednesday night's Turtle Tug. The tug-of-war philanthropy, hosted by Sigma Phi Epsilon and Delta Zeta, raised $1,600 for a summer camp in California for terminally ill children.

Co-sponsored by the Delta Zeta sorority, Wednesday's event featured The Turtle Tug, a tug-of-war tournament between 10 sororities and 12 fraternities. The affair raised more than $1,600 to benefit the Painted Turtle, a summer camp for terminally ill children in California.

"We've done it every year," said Paul Giovacchini, a member of Sigma Phi Epsilon and a senior in the College of Liberal Arts. "It's a lot of fun. We really look forward to it."

The Exponent - Purdue's Student Newspaper
Posted by Wordjunky at 10:37 AM
Email ThisBlogThis!Share to TwitterShare to FacebookShare to Pinterest