Well, shiver me timbers, lads. "International Talk Like a Pirate Day" has come 'round again. Today you can wear "ahrrr-gyle" sox, see an "ahrrr" rated movie, and call your girlfriend a "buxom wench" without remorse. And don't forget the hook, pegleg, eyepatch, and parrot.

It is a good way to get over your guilt at missing "Constitution Day", at least.(It's really OK, we haven't used it in the last few years, anyway.) 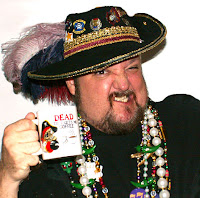 LONDON (Reuters) - Put a parrot on your shoulder, strap on a peg leg, hit the rum and start bellowing "Shiver me Timbers" -- Wednesday is International Talk Like A Pirate Day.
[...]
September 19 is your once-a-year chance to don an eye patch, sport a ridiculously large hat and keep on saying "Arrrrr.

It all started back in the 1990s as a cult joke between two American friends -- John "Ol Chumbucket" Baur and Mark "Capn Slappy" Summers -- but really took off when syndicated columnist Dave Barry got to hear about their surreal festival.

"We tap into that need for whimsy in people's lives," Summers says of the 24-hour celebration of quirkiness when they urge all self-respecting swashbucklers to show "pirattitude."

International Talk Like a Pirate Day (TLAPD), which adopted Treasure Island star Robert Newton as its patron saint, now attracts fans from as far afield as Britain and Australia and even boasts a special Wikipedia site on the Internet.

...and just for the 'ell of it: Pirate Pickup lines.

Tomorrow you'll pay a buccaneer for corn? - Yahoo! News
Posted by Wordjunky at 12:53 PM
Email ThisBlogThis!Share to TwitterShare to FacebookShare to Pinterest