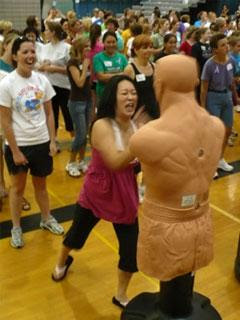 Nearly 600 women attended the June 21 TAKE Defense class. The class filled up within hours of its announcement, following the abduction and murder of Kelsey Smith.

OVERLAND PARK, Kan.  --  The executive director of the Sigma Phi Epsilon fraternity announced that the organization will partner with the Ali Kemp Educational Foundation's "T.A.K.E. Defense Training Program" on Friday.

The program will now be one of the fraternity's two national philanthropies. Many SigEp chapters across the country are expected to hold events to raise awareness and money in support of the program.

Roger Kemp, Ali Kemp's father and a member of the fraternity, was present at the announcement. Tyler Kemp, Ali's brother, and Phil Howes, Ali's long-time boyfriend, are also members of SigEp.

SigEp's other national philanthropy is Youth Aids. The fraternity has more than 262,000 lifetime members nation wide, including 13,500 undergraduates on 260 campuses.

Ali Kemp was 19 when she was murdered at a neighborhood pool in Johnson County, Kan. in 2002. Ali's family established the Ali Kemp Educational Foundation and the T.A.K.E. Defense Training Program in her memory.

Posted by Wordjunky at 11:23 PM
Email ThisBlogThis!Share to TwitterShare to FacebookShare to Pinterest