Hot Rumor - a 'dark horse' candidate for Grand Pooh-bah may be emerging. No word on whether he has arrived in Atlanta yet, but it could make things interesting.

Brotherhood Lunch -
The brotherhood lunc is calculated to be emotional, introspective, and uplifting at the same time. After opening remarks the "necrology" was read. The list of those who have died in the last two years was especially moving when Jim Robeson's name was mentioned. 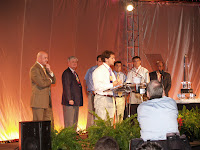 After lunch the "Order of Philias" was presented to the LA Alpha chapter (Tulane) for their work in local neighborhoods after hurricane Katrina.

Charlie Engle recently finished the insane feat of running across the Sahara Desert - over 3000 miles in 100 days. Do the math, it is about 2 marathons a day! His story of his early trouble and finding his 'calling' to extreme sports was very inspirational.

Posted by Wordjunky at 9:31 AM
Email ThisBlogThis!Share to TwitterShare to FacebookShare to Pinterest