Courtesy of The Fratboy News 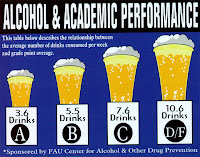 A former college president has been very outspoken lately, advocating a change of the legal drinking age in the United States to 18.

John M. McCardell Jr., a former president at Middlebury College, established a group called Choose Responsibility. He and the group are behind the idea that a lower drinking age may make one of the most popular activities for college students a little safer.

"If binge drinking has never been worse, why do we think legal age 21 has been successful?" McCardell says. "Drinking is taking place in out-of-sight places and in settings that increase the risk of harm to the individuals who are consuming alcohol and anyone who finds themselves in their path. I think we can do better."

One of his ideas is for teenagers to complete a test to get a drinking license that would allow them to drink before turning 21.
Posted by Euripides at 2:11 PM
Email ThisBlogThis!Share to TwitterShare to FacebookShare to Pinterest