[Thanks to Bill Hydrick for pointing out this article] 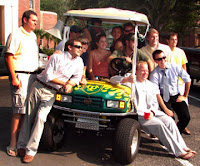 It's about 1,700 miles from Los Angeles to New Orleans as the crow flies, but likely a lot longer the way Greg Thurnher traveled on his trek to raise awareness about the Big Easy's comeback from Hurricane Katrina and its continued appeal as a college town.

In his first venture as a newly minted graduate of Tulane University's Business School, Thurnher set out from Los Angeles on May 20 in a souped-up golf cart that was inspired by his undergrad senior engineering project, making multiple stops along I-10 to stage mini-Mardi Gras parades with a contingent of 10 Tulane students and alumni.

On Friday (June 1), the good-times golf cart rolled into the Crescent City and paraded to the uptown Tulane campus.

"Learning, living and growing at Tulane clearly defined what I now know as my life. I can't imagine attending any other university in any other city," Thurnher says. "I am troubled that others may forgo the benefits of a Tulane education and a life in New Orleans based on misperceptions about what's going on there.

"So I hope this trip will underscore how much a recent graduate believes in the city and how wonderful it was for me to be part of its comeback as a student. Being there and contributing to its recovery is a great experience."

Thurnher says that, while some New Orleans neighborhoods are still struggling, no one should miss a chance to experience what is still the country's most unique city.
After receiving his MBA degree on May 19 from Tulane, Thurnher flew from New Orleans to Los Angeles, his childhood home. The next day, he boarded his golf cart and began to wend his way through the Southwest, veering off to Houston, where he works now, and finally arrive back in New Orleans.

He and his team of supporters made numerous stops along the way in Arizona, New Mexico, Texas and Baton Rouge, La., parading through towns and throwing Mardi Gras beads to promote the Big Easy's ongoing vitality and joie de vivre. Thurnher has dubbed his trip Operation Big Easy Go.
Jack in the Box restaurants sponsored Thurnher's odyssey, providing him and his fellow travelers with food and Mardi Gras-style throws throughout the length of their trip.

"I feel greatly indebted to my university and my city," Thurnher said. "My service in restoration efforts is trivial when compared to those who have 'lived' the restoration every step of the way. I want those New Orleanians and Tulanians to know that their patience and dedication to New Orleans is worthwhile."

Tulane University Magazine - News
Posted by Euripides at 8:38 AM
Email ThisBlogThis!Share to TwitterShare to FacebookShare to Pinterest