How to helpDonations may be sent to:
Friends of Paul Conticelli
P.O. Box 2013
New City, NY 10956
Update:A link to the story

Keeping a promise to his mother might have saved Paul Conticelli's life early one Sunday morning in March.

Paula Conticelli made her 19-year-old son and his University of Delaware fraternity brothers promise that they would always use the buddy system while on spring break in Cancun, Mexico.

Around 4 a.m. March 25, Paul, who is from Stony Point, was crossing the street to return to his hotel room with his Sigma Phi Epsilon brother Mark Ptomey. The pair had spent the night at a club.

As he began to cross, a local man - traveling in a car at 80 mph, without his headlights on and who was later charged with driving while intoxicated - struck Conticelli, cracking his skull, fracturing his left leg and eventually leaving him in a medically induced coma. He had been in Cancun less than 24 hours. 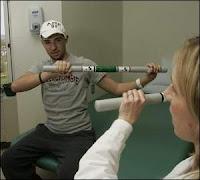 Now, nearly two months later, Conticelli's injuries have largely healed, remarkably, without any surgery. His voice is no longer a whisper. He can walk again. Last month, he struggled to do three minutes on the treadmill. Last week, he was up to 16 minutes and at a higher speed. He said he is at 80 percent.

But Conticelli and his family now face new challenges, including bills likely to reach six figures.

"We have seen the power of prayer with our own eyes," said Paula Conticelli, who anointed her youngest son with holy oil from head to toe in the hospital, read Bible verses and prayed over him every day. "There's no way prayer has not been the answer and God has not had a hand on him."

She said help has come in all forms and from all directions.

Immediately after the accident, the 14 fraternity brothers who also made the trip rallied to Conticelli's side. They arranged to have him moved from a clinic to a hospital. They talked with doctors until his family arrived. They kept vigil.

"All day, people were taking shifts, staying there," said Joe LaBruno, Conticelli's big brother at the fraternity. "We had two brothers there at all times, rotating."

LaBruno also made what he called "the hardest phone call of my life." He knew that Conticelli's older brother, Matthew, 17, had been killed in a motorcycle accident in 2002 in Queens. Now, he had to break this news to Conticelli's mother.

Paula Conticelli was asleep when the phone rang at 6:30 a.m.

"Tell me what it is," she said after she heard LaBruno's voice. "Just give me what I've got to know."

The phone connection got cut off three times while they talked.

Paula Conticelli's passport had expired. So her boss at Bullet Security in Nanuet and his wife got in touch with the State Department to get it renewed within a few hours. The couple also paid for four airline tickets - for her, her eldest son, Robert, a cousin, Amanda Ruiz de Somocurcio, and de Somocurcio's father, Jose.

While Conticelli's mother and brother attended to him, Amanda Ruiz de Somocurcio made arrangements to fly him back in an air ambulance to New York-Presbyterian Hospital in Manhattan three days after the accident. Her father, who speaks fluent Spanish and worked as a respiratory therapist in New Jersey for 30 years, translated for both the family and the doctors.

"We didn't know which way it would go," de Somocurcio said, noting Conticelli had swelling in the brain and developed pneumonia.

StudentCity.com, the travel agency that handled the young man's trip, paid for their meals, hotel and transportation in Cancun. In the ensuing weeks, neighbors brought food over to the Conticelli house virtually every day. They've helped with errands and moved furniture around the home to make it easier for Conticelli to move back in, which he did last week.

The family has set up a fund to cover the young man's medical costs, which total $50,000 from Mexico alone.

Paula Conticelli doesn't even want to think about how much the bills from New York-Presbyterian and Helen Hayes Hospital in West Haverstraw, to which Conticelli was transferred April 17 after he came out of his coma, will cost.

Conticelli had traveler's insurance, which he bought for $40 when he booked his trip. He also has insurance through his stepfather and his biological father, but how much will be covered is not clear.

They've raised $1,500 by selling 500 black wristbands that read "Stay Strong Paul." Several of the brothers have also driven to Rockland to visit him at the hospital.

"It's not like it's a close ride," Conticelli said. "They up my spirits."

Ironically, Paula Conticelli opposed her son's joining a fraternity. She admits she was wrong. She's seen the loyalty and love up close.

"I felt like I've had 23 kids without giving birth to them," she said.

Conticelli was released from the hospital last week, although he will still go to Helen Hayes for physical therapy. These days, he said he is dealing with self-doubt and hurtful rumors circulating about him more than any physical pain.

"I keep questioning everything I did," he said. "Did I look both ways when I crossed the street?"

Recently, he's heard nasty rumors that he was to blame for the accident because he was playing games in the middle of the road. Others say he's brain-dead.

These things hurt "when you're struggling to get your life back," said Conticelli, a 2005 graduate of North Rockland High School.

But he is back at home now and plans to return to the University of Delaware in the fall.

As for the man who hit him, the family says that he's in jail, awaiting trial. Apparently, he is remorseful. The man's mother and siblings called daily while Conticelli was in the hospital in Mexico.

"He has a big price to pay," said Conticelli, who wants to see him serve prison time and enter rehab.

In the past weeks, Conticelli has been made aware of what his loved ones, friends and neighbors have done for him and his family. He is deeply grateful. His mother, Paula, knows some good will come from her son's brush with death. She has decided to become an organ donor.

"I would have to say my faith, a wonderful therapist and incredible friends and family helped me pull it all together," she said. "I really believed God would not put me through another loss."
Posted by Euripides at 6:44 AM
Email ThisBlogThis!Share to TwitterShare to FacebookShare to Pinterest