(And wouldn't you know, there's a Sig Ep connection!)

Jeatt Walker, a University of Washington math student and aspiring model, thought she'd gotten her big break when she was named cover girl on the "Women of UW" calendar dreamed up by a group of business students. 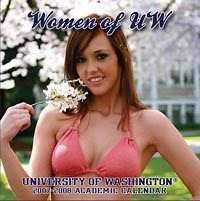 But when Walker's proud mom went to the University Book Store last week to buy copies, she was turned away. The calendar had been pulled from the shelves.

Part of the reason may lie in an e-mail campaign started by some students who say the calendar objectifies women.

The whole episode has yielded some surprising lessons about business and about life for the five students who produced the work for their entrepreneurship class.

"I never would have guessed any of this going into it," said junior Zach Meissner, who began as the group's financial manager — and turned into its crisis manager.

Meissner said the students intended to produce "his and hers" calendars. But despite an eager group of males willing to pose, their market research showed consumers generally sought to buy only the female version.

About 30 women applied to pose, plus some friends were enlisted, Meissner said. The calendar features 13 of them; one month shows twins.

The shots are tame compared to many publications, Meissner said.

"We wanted to show beautiful women who were very successful with what they are doing at the UW," he said.

Walker, 20, said she had no doubts about signing up.

"When I first heard about it, I thought 'This is so rad. This is my chance to get connected to the school,' " she said.

"It was classy enough that I was not embarrassed to show it to my family. It was the first big thing I've been in."

She said the calendar "displayed a really good fact that women can be smart and beautiful. The UW is full of really powerful women."

But other students weren't so taken.

"As I flipped through its pages, I became increasingly upset at its blatant objectification of UW students," some wrote in an open letter to UW President Mark Emmert.

"More importantly, I was horrified at the prominent display of the University of Washington's name and trademark logos spread across the pages of the calendar, providing the background for female students posing in provocative outfits against campus settings."

Meissner said that in all, 1,500 calendars were produced, which the team of students is selling for $15 each.

So far, about 200 copies have sold, not counting the nearly 300 disputed copies purchased by the bookstore.

Meissner said that because the calendars begin with the month of September, he expects demand to pick up in late summer.

It's not the first time Meissner has turned up in the news. In December 2005, Meissner appeared on two national television morning shows — ABC's "Good Morning America" and NBC's "Today" — as president of the UW's Sigma Phi Epsilon fraternity to discuss its embrace of the national fraternity's new "Balanced Man" program.