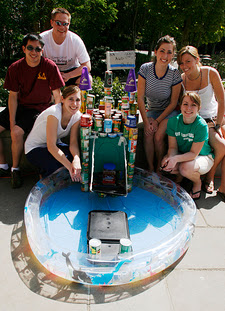 Yesterday, the UW Greek community brought a taste of Greek Week to campus with its annual Canned Food Castle Building Challenge at the HUB entrance.

Unlike many calls for canned-good donations, this food drive went beyond dumping non-perishables in a bin.

Eighteen chapters participated in the event, collecting canned foods and assembling them into structures corresponding with respective themes Passers-by may have recognized a variety of designs, including the Campbell’s Soup ship, a treasure chest full of canned tuna, a pirate’s hook and even a castle with a mini-swimming pool moat.

For some, the two-hour event may have been an avenue of creativity, but freshman Garth Purkett of the Theta Chi fraternity felt it was a community-minded opportunity.

“This event, and Greek Week overall, is an opportunity to continue the role of leadership in my community, which I did a lot of in high school,” he said.

More than 500 cans were used as materials for building the structures. All were donated to the University Food Bank.

“There is no pre-determined amount set for this event,” said Conner Carroll, a senior and vice president of Greek relations for the Interfraternity Council (IFC). “It is just about giving to the Seattle community while strengthening our University’s community.”

Many Greek students gathered at the end of the event to support their team’s creation in anticipation of the challenge’s results, which were based on creativity.

“The city of Seattle is probably going to be sick of eating Campbell’s tomato soup and chicken noodle after we turn in our cans,” said junior Jacob Reyes of Theta Xi.

This fundraiser was one bead on the string of philanthropy events held during the annual Greek Week, hosted by Panhellenic Association and the IFC. This year’s other beneficiaries include Relay for Life, Boom Town Cafe and the Community Service for the Blind and Partially Sighted.

All chapters, including the United Greek Council and the National Panhellenic Council, are invited to participate in the weeklong event that began Sunday and will end Saturday with the Relay for Life at Husky Stadium.

“This and the other events took months of planning, so it’s exciting to finally see it unfold with such high participation and great weather,” Carroll said.
Posted by Euripides at 1:27 PM
Email ThisBlogThis!Share to TwitterShare to FacebookShare to Pinterest