Where in the world is... SigEp Travel?

In the words of Forrest Gump: "Whenever somebody says 'I am here to help you,' hold on to your wallet." 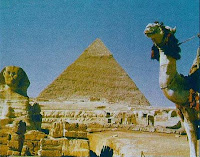 In the last week or so we have received at least two mass-generated emails touting "SigEp Travel" as the way to get good deals and also help fill the coffers at HQ. As a practical matter, this travel venture may very well be a way to 'brand' travel services that are competitive, if not always lowest priced. But some questions and considerations and considerations came to mind as we were looking over the proposals, and the deeper we went, the more concerned we got.

These mailouts were sent over the signature of our executive director, so it is reasonable to assume that he is at least aware of, and probably supports, this use of the fraternity email list. The first question that came to mind is "who authorized using the SigEp trademark for a commercial venture"? The fraternity is aggressive in making sure that providers of "Greek-ware" pay a license fee when using one of our trademarked words or symbols. Is there any potential for conflicts of interest? Was there any oversight for this venture? Did the NBD know of it and approve? "Inquiring minds want to know."

Your personal information is never intentionally shared outside the organization without your permission,...

Not only was there an apparent disregard for the written privacy policy, but there was no way to opt-out of future email solicitations, as required by law (CAN-SPAM act of 2003). This member is very concerned that these apparent legal and ethical shortcuts were taken.

How well does this particular venture fit with the Fraternity mission statement: "Building better leaders for the world's communities"? We fail to see how partnering with a travel service (or a credit card company for that matter) furthers the mission of Sigma Phi Epsilon. Rather, with all the convoluted payment schemes (see the paragraph on "MLM schemes" below) you have to wonder if we will need to dedicate a wing of "Zolly House" just to keep up with the nickles and dimes.

In one of the emails our esteemed executive director notes he has been using the service and "has found it to be cheaper than other services in many cases." That is interesting in itself since the engine behind the service is Travelocity.com, as interpreted by "YourTravelBiz.com", and they presumably are not using the service as a loss leader. But I digress (see next paragraph). If this is such a wonderful service then put a link to in on the HQ web site. In fact, for a small "click thru" charge I'm sure we can arrange to have the "Junkster" put an ad on the S&P site (it would get more eyeballs there!).

In fact, "YourTravelBiz.com" looks suspiciously like a Multi-Level-Marketing scheme, aka Pyramid. A testimonial on the website declares:

"One of YTB’s goals is to create more millionaires than any other company in the world. I am convinced 100% that YTB will also make my dream of becoming a millionaire a reality."

One wonders exactly where individual members of SigEp are on the pyramid? Presumably, there is someone 'up-line', as well as "SigEp Inc.", who is benefiting from travel booked on the site. Are they paying back a license fee? Again, this raises questions of disclosure and conflict of interest. Ultimately, is this something that we really want to be associated with?

The points above are more about disclosure and oversight than whether an action is permitted. To put it another way, it may be legal, but is it right?

Enough of a rant. Now for a call to action. We have a Conclave coming up where legislative action may be taken for the good of the Fraternity. There are some items of legislation that could come up as a result of this travel scheme, e.g.:There are probably more, but that is a start. Let's see if someone wants to write some proposals and have some fun in Hot-lanta.

From an undisclosed location, I am Diogenes and I approved this message.
Posted by Diogenes at 5:37 PM
Email ThisBlogThis!Share to TwitterShare to FacebookShare to Pinterest