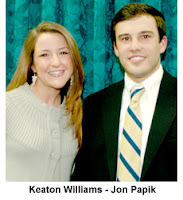 Vols Unite candidates Jon Papaik and Keaton Williams plan to stick to a low-budget campaign in spite of this year's $10,000 spending cap. Their goals are to inform students and promote them while providing a secure environment on campus.

Papaik, the group's presidential candidate, is working to complete a double major in accounting and hotel administration.

Papaik has experience working with various campus organizations. As a member of Sigma Phi Epsilon, he served the Student Alumni Associates as president and vice-president. He also spent his sophomore year in the Student Senate.

During campaign week, Papiak said he hopes to show students that they can use SGA as a valuable resource. He said that, if elected, he will make sure the student body web page becomes a student portal to resources such as Blackboard and Circle Park Online.

"SGA should not be promoting itself, but promoting students," he said. "We want students to be aware of what they have."

Williams, a journalism and electronic media major and the group's vice-presidential candidate, said "Vols Unite is about the students. Everything we do is for the students. We want to allow students to use SGA."

Though Williams has never been a part of the Student Senate, she has gained experience by attending SGA meetings and working on election campaigns. She also is an executive member of the Alpha Delta Pi ethics committee and a member of the UT student chapter of the Society of Professional Journalists.

Williams, who lacks only 16 hours to complete her degree, will have to stretch the rest of her college career into two semesters if she is elected - but that doesn't worry her. She said she feels doing so would give her more time to be a receptive SGA vice-president.

"As vice-president you need to have time to answer questions," she said. "I have helped work on campaigns and watched what people did in meetings. But to actually do it yourself is so cool."

Papiak wants students to find out more about Vols Unite. "I challenge a person to find someone who knows us to understand we are doing this for students," he said.

For more information about the campaign, Facebook.com members can check out the Vols Unite page.
Editor: Sarah Nutt
Editor: Emily Maddox
tnjn.com: SGA candidates get set to compete for student votes
Posted by Wordjunky at 9:16 PM
Email ThisBlogThis!Share to TwitterShare to FacebookShare to Pinterest