University of Nebraska at Omaha Sig Eps and ΑΞΔ teamed up to raise $1600 for Ronald McDonald House. 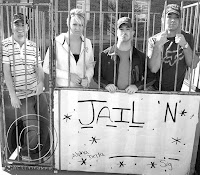 Sophomore Nicole Learch stood behind bars on campus with little hope of being released. Until she made her $25 bail, that is.

From inside the jail cell in the middle of the student plaza, Learch pleaded for help from everyone who passed by. "I only have $8, can you give me a dollar to get out of jail?" she asked.

Soon someone took pity on her and she collected another dollar to add to the ones already in her pocket. "My strategy is to say I only have a certain amount of money. It is very successful," Learch said.
[...]
Each Alpha Xi Delta sorority member was required to participate in the event by getting volunteers to be "arrested" or by being arrested themselves. The sorority's philanthropic chair, Sarah Dighans, set the $25 bail amount hoping to reach the goal of $1,500.
[...]
However, coming up short was not an issue for the event this year. Co-sponsored by the Sigma Phi Epsilon fraternity, the event raised $1,600 for the Omaha Ronald McDonald House. It was the highest total in the six years of the event.
[...]
Representatives from the Omaha Ronald McDonald House were present to thank the sorority for their assistance. In a statement to Alpha Xi Delta president Shayna Royal, Omaha Ronald McDonald House Executive Director Kevin Warneke said, "We really appreciate what you're doing for us."

Omaha Ronald McDonald House program coordinator Paul Garcia said funds raised by the Jail n' Bail event go into the House's general operating fund, which helps to pay lodging for families in need. The charity's Web site, rmhomaha.org, explains, "…families come to the Omaha area for medical treatment for their children. They come to Omaha to be with their sick child, and the Ronald McDonald House provides them with a place to temporarily call home."
[...]
"Fundraising like this helps us to continue to provide hospitality and housing without being overly concerned about the financial impact on families," Garcia said.

UNO sorority, fraternity members 'arrested' on campus for good cause - People
Posted by Wordjunky at 8:50 PM
Email ThisBlogThis!Share to TwitterShare to FacebookShare to Pinterest