At DePauw University the Delta Zetas were a diverse group but not very large. After they were 'reviewed' by a delegation from their National Headquarters they ended up much smaller ans lots more homogeneous - all white, all thin, all popular... 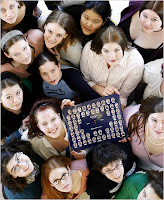 When a psychology professor at DePauw University here surveyed students, they described one sorority as a group of “daddy’s little princesses” and another as “offbeat hippies.” The sisters of Delta Zeta were seen as “socially awkward.”

Women at DePauw University in Indiana who were either asked to leave the Delta Zeta house or resigned in protest hold a sorority photo.

Elizabeth Haneline, who was among those evicted, said, “The Greek system hasn’t changed at all, but instead of racism, it’s image now.”

Worried that a negative stereotype of the sorority was contributing to a decline in membership that had left its Greek-columned house here half empty, Delta Zeta’s national officers interviewed 35 DePauw members in November, quizzing them about their dedication to recruitment. They judged 23 of the women insufficiently committed and later told them to vacate the sorority house.

The 23 members included every woman who was overweight. They also included the only black, Korean and Vietnamese members. The dozen students allowed to stay were slender and popular with fraternity men — conventionally pretty women the sorority hoped could attract new recruits.

Half of the "lucky" survivors were so pissed off at the blatant "image bias" that they quit anyway.

“Virtually everyone who didn’t fit a certain sorority member archetype was told to leave,” said Kate Holloway, a senior who withdrew from the chapter during its reorganization.

“I sensed the disrespect with which this was to be carried out and got fed up,” Ms. Holloway added. “I didn’t have room in my life for these women to come in and tell my sisters of three years that they weren’t needed.”
[...]
DePauw’s president, Robert G. Bottoms, issued a two-page letter of reprimand to the sorority. In an interview in his office, Dr. Bottoms said he had been stunned by the sorority’s insensitivity.

“I had no hint they were going to disrupt the chapter with a membership reduction of this proportion in the middle of the year,” he said. “It’s been very upsetting.”

The president of Delta Zeta, which has its headquarters in Oxford, Ohio, and its other national officers declined to be interviewed. Responding by e-mail to questions, Cynthia Winslow Menges, the executive director, said the sorority had not evicted the 23 women, even though the national officers sent those women form letters that said: “The membership review team has recommended you for alumna status. Chapter members receiving alumnae status should plan to relocate from the chapter house no later than Jan. 29, 2007.”

Ms. Menges asserted that the women themselves had, in effect, made their own decisions to leave by demonstrating a lack of commitment to meet recruitment goals. The sorority paid each woman who left $300 to cover the difference between sorority and campus housing.

The sorority “is saddened that the isolated incident at DePauw has been mischaracterized,” Ms. Menges wrote. Asked for clarification, the sorority’s public relations representative e-mailed a statement saying its actions were aimed at the “enrichment of student life at DePauw."

In other words: "We had to destroy the Chapter to save it." Right.

There is more in the complete article. It is too long to reprint here, but it goes on to note the Chapter was known for recruiting the 'smart' women - math and engineering majors, as well as focusing more on the person than the 'image'. Earlier issues with their National Organization are also detailed.

I came away with the impression that it is not always the undergrads hazing pledges covered in catfish bait that give Greek organizations a bad name. The ΔΖ leadership seems to have done a wonderful job of shooting themselves in the foot this time.

Sorority Evictions Raise Issue of Looks and Bias - New York Times
Posted by Wordjunky at 12:31 AM
Email ThisBlogThis!Share to TwitterShare to FacebookShare to Pinterest