Looks like the gentlemen at Ohio State have come up with a unique way to help the homeless and clean up at the same time. 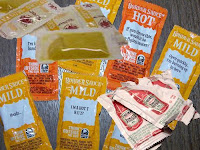 Entitled "Condiments for the Homeless," the volunteer campaign seeks to match those in need with those who have plenty, said fraternity president Allen Jacobs.

"Pretty basically, we saw that our main refrigerator was 'busting at the seams,' shall we say, with leftover ketchup, soy sauce, and Taco Bell sauce packets," he said, filling a grocery bag with the condiments. "We got to thinking that there were probably many frats and sororities with the same problem, and a lot of homeless people who have no relish packs for whatever food those people get fed."

Jacobs said that the SigEps took the idea to the Greek Council, and the rest "was like history."

"Our Greek brothers and sisters have really stepped up and answered the call," he said. "We have almost a trunk full of these valuable food accoutrements to take to the homeless shelter downtown, and you have to know there's a lot of good nutrition in this stuff. Plus, we only take packets that have been refrigerated, not like left in the glove box or anything."

Jacobs said that the brothers of SigEp "pride themselves" on eliminating the “Animal House” reputation that is often associated with fraternities.

"Sigma Phi Epsilon is designed to promote leaders as well as gentlemen," he proudly added. "We feel that we have, in some small way, helped bring a little light into the lives of the less fortunate, as well as making progress on cleaning out our skanky fridge."

Way to go, Guys. Nice to know the guy munching on the burger he dug out of the dumpster behind Mickey D's will have some ketchup and mayo to wash it down.

Codependent Collegian: Fraternity Launches "Condiments for the Homeless" Drive
Posted by Wordjunky at 10:53 PM
Email ThisBlogThis!Share to TwitterShare to FacebookShare to Pinterest