Michigan Tech kept on with the Winter Carnival tradition. Plenty of snow and cold weather means the snow and ice sculptures will be spectacular. 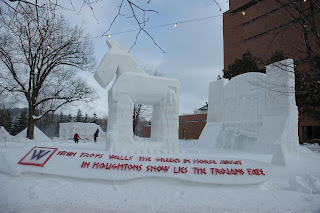 “We were originally doing Easter Island but about three other halls are doing that,” Jay Meldrum said, explaining his team’s last-minute subject change.

Meldrum’s team, a group from Wadsworth Hall called “Incognito,” eventually settled on an evolution theme, crafting a series of figures from monkey to human. The Trojan Horse was another popular statue subject, rendered most imposingly by the Sigma Phi Epsilon fraternity. Fraternity member Thomas Knuth was careful to point out the figure, centrally-located next to the Electrical Energy Resources Center, was “not a Scottish terrier.”

Sigma Phi Epsilon statue chair Paul Mayer said the Trojan Horse had the most potential to pose a striking figure among the statue subjects the fraternity discussed.

“We thought it was the coolest one, it had the most action of the ideas we thought of,” he said.

The Carnival web site has all the pictures. (The Trojan Horse pic is really Big! click it!)

All-nighter delighter
Posted by Wordjunky at 10:54 PM
Email ThisBlogThis!Share to TwitterShare to FacebookShare to Pinterest