DJ $crilla is "in da house" at OSU. You may remember him from the 2005 Nashville Conclave. 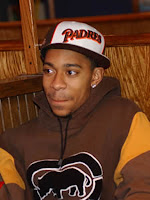 DJ $crilla is a student, musician and someone who has a new vision of what hip-hop is today.
[...]
DJ $crilla, whose real name is Chris Harris, has made a name for himself by creating a new sound that catches listeners attention and brings something new to the music scene.

His style of hip-hop has led him to create songs unlike those in the mainstream which talk about getting ladies and living large.

Instead, he raps about fraternities and sororities.

Harris first got the idea to rap about greek life when he went to Kent State University and joined the Sigma Phi Epsilon fraternity.
[...]
Since writing that first song, he has created unusual hits for different fraternities and sororities scattered throughout the country.

“His music is a little different for my taste, but it’s cool to have a song that you and your sisters can dance to,” said Lindsey Roskam, an elementary education sophomore and member of Alpha Delta Pi.

"A little different" indeed. The front row of the Ryman was populated by "old grumpy has-beens" who were, shall we say... less than enthusiastic about his hip-hop style. Of course those folks still think Michael Jackson is cutting edge, so consider the source.

Rapper offers insight on lyrics, catchy sounds
Posted by Wordjunky at 10:30 AM
Email ThisBlogThis!Share to TwitterShare to FacebookShare to Pinterest