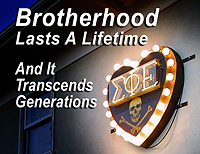 We have not done "Chapter of the Week" in several months. The guy who was doing it (that would be me) had some silly idea he wanted to finish an MBA instead of staying up till all hours cruising web sites. However, we do pay attention when a particularly interesting web site shows up.

The Utah Beta Alumni have put together a Nice web site. It is definitely not "Web 2.0" but there is good information, lots of pictures, and most of all it held my interest. I could tell these guys had really "got it" about the "lifetime of brotherhood" concept. I especially liked the "then and now" photos of the members (and a few golden hearts as well).

Technorati tags: SigEp, Alumni, fraternity
Posted by Wordjunky at 7:29 AM
Email ThisBlogThis!Share to TwitterShare to FacebookShare to Pinterest