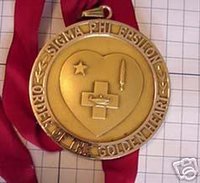 It was bound to happen sooner or later. One of our deceased honorees' OGH medallion is for sale on eBay. We have no idea how it came to this end, but can only assume the family did not value it as much as he did.

Someone with good intent and deep pockets could "keep it in the fold", so to speak, and that would be a nice gesture. Maybe they could gift it back to his chapter or to HQ for the archives.

On a more cynical note, if you want to get fawned over by naive undergrads at the next Conclave here is your chance! But you better hurry - the auction ends August 9 at 3:15 PM (PDT).