Never too old to be a "Frat Boy"

With all the wonderful Sig Ep success stories we hear, you just know there is another side lurking out there somewhere. Here it is. 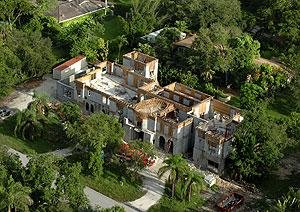 But the ultimate symbol of his newfound success is rising on a tree-shrouded street just beyond Coral Gables.

There, the boy raised in a concrete-block house in working-class Hialeah is building an 11,000-square-foot estate that includes a wine cellar, library, billiard room, elevator, pool, spa and fountain -- plus a grand foyer, three stories high, fixed with Mediterranean columns and a spiral staircase.

It is Oscar Rivero's dream house.

And it is the only thing he has managed to build in the past four years.

Today, the land where Rivero promised dozens of homes for the poor is still vacant, cordoned off by fences -- eyesores in already distressed neighborhoods. Rivero hasn't delivered a single house even though he's held on to millions of dollars in public money -- while buying personal properties and an office for more than $4.9 million.
[...]
Rivero's father drove a bus for Miami-Dade Transit. His mother worked for minimum wage behind a sewing machine in a factory.

After graduating from Hialeah High in 1987, he went on to Florida International University and joined Sigma Phi Epsilon fraternity, where he was introduced to Cuban Americans who came from wealthier places like Coral Gables and Kendall. Some of those frat brothers are his business and political associates today.

Let me guess... Probably NOT a Citation Candidate.