To begin with the end in mind… There will not be a “Bloggers Breakfast” or “Social Media Lunch” at the Nashville Conclave this year. The way I look at it, this is a positive outcome that flows naturally from over ten years of advocacy by many of us who “toil in the vineyards” of individual chapters. We have seen social media evolve from a curiosity for geeks to an encompassing standard of communication that is used - and misused - by the entire population. I applaud the way SigEp Headquarters has adopted e-communication and is using the various channels to better connect with undergraduates and alumni.


I question if an independent "Social Media" event, such as a “Bloggers Breakfast” is worthwhile any more. Why would I say that? - you may ask…

The bottom line is there is more interest than ever in harnessing and managing the social media aspect of communications in the Fraternity. We have outgrown the "band of merry scoundrels" mentality; it’s time  to get on with real training in how to use - and not misuse - the very powerful tools available to us. For that level of training to be effective the resources of the fraternity are needed, not merely a breakfast club or lunch bunch.


I am glad to see that one of the educational offerings for undergraduates is titled ”Winning with social media: How to stand out from the crowd” It is scheduled for 2:30 PM on Thursday the 13th and I encourage any undergrads who want to learn more about positive and effective use of social media to attend. (Alumni who are not otherwise engaged will be welcome too.)

Thank You and Happy Holidays

New Gallup Poll on Lifelong impact of Fraternities and Sororities

Thanks to Pete Steffens for finding and sharing this with us. 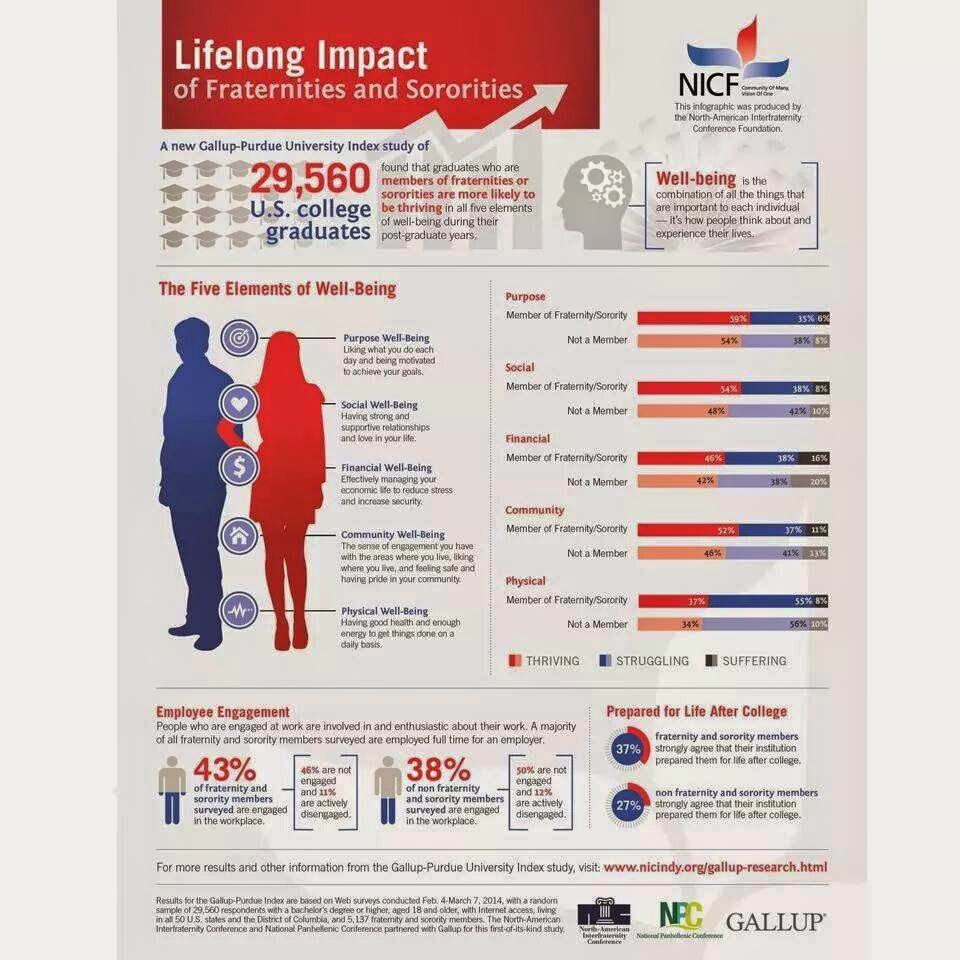 For more information go to :http://www.nicindy.org/gallup-research.html

Posted by wordjunky at 11:13 AM
New Gallup Poll on Lifelong impact of Fraternities and Sororities
2014-11-02T11:13:00-06:00
wordjunky
Alumni|Benefits|Life After College|Lifetime Commitment|
Comments
Email ThisBlogThis!Share to TwitterShare to FacebookShare to Pinterest 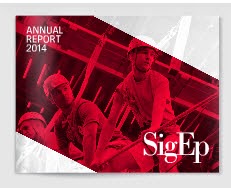 Rather than a general "Happy Founder's Day post, we are sharing the newly released SigEp 2014 Annual report.
This report shows how the fraternity has progressed lately. It's not super flashy, and there are lots of details, but any parent who wonders if their son is getting value out of his membership will find lots to like in these pages.

Posted by wordjunky at 10:52 AM
Happy Founder's Day. The 2014 Annual Report Show Our Progress
2014-11-01T10:52:00-05:00
wordjunky
Comments
Email ThisBlogThis!Share to TwitterShare to FacebookShare to Pinterest

Tulane University - Can you keep up with Schiffman?

Jeff Schiffman is a Tulane SigEp alum and a former Chapter Counselor.

Thanks to Bill Hydrick for passing the article along

Tulane University - Can you keep up with Schiffman?

While some people’s motto is “don’t sweat the small stuff,” Jeff Schiffman’s motto is simply “ SWEAT!”

Jeff Schiffman says his spinning class called RIDE “isn’t just about your body; it’s about your brain and your heart.” (Photo from Romney Pilates Center)
As the senior associate director of admission at Tulane University, his schedule takes him all over the world recruiting students. While life on the road can make it difficult to maintain any schedule, Schiffman is dedicated to staying healthy and having fun.
After he took a spinning class in Los Angeles a few years ago, he was immediately hooked. This led Schiffman to start teaching his own class, a high-energy, full-body workout called RIDE, at Romney Pilates Center in New Orleans. The maxim of his class might be “think with your whole body” but with his musically themed sessions, ranging from ’80s to Beyoncé to Glee, his patrons often forget to think and just have fun.
“You’ll leave my class covered in sweat,” Schiffman promises, “but it’s my hope with an incredibly positive feeling. RIDE isn’t just about your body; it’s about your brain and your heart.”
In fact, most of Schiffman’s activities in New Orleans center around body, brain and heart, and getting others into the same. Aside from doing triathlons all over the Gulf South, he participates in a boot camp in Audubon Park with Office of Admission staff.
Through Outreach Tulane, Schiffman started his involvement with Youth Run NOLA, an organization that works to empower underserved students in the New Orleans area by training them to run races like the Crescent City Classic and Rock ‘n’ Roll Marathon.
Schiffman still runs with the same group of students he started with four years ago. And last month he helped Romney Pilates organize a Pride Ride for members of the LGBT community, which had a great turnout from Tulane students and staff.
In everything he does, Schiffman puts his mind, heart and sweat all in to help others get the most out of theirs.
Posted by wordjunky at 1:56 PM
Tulane University - Can you keep up with Schiffman?
2014-10-27T13:56:00-05:00
wordjunky
Alumni|Sound Body|Tulane|
Comments
Email ThisBlogThis!Share to TwitterShare to FacebookShare to Pinterest


As an organization SigEp has focused on the concept of "Sound Mind; Sound Body" for the last several years. That is now part of our core. Our academic progress across all chapters has been amazing since grades became something we measure. SigEp has also made great strides in the areas of diversity and inclusion is a relatively short time.

Now it's time for SigEp as an organization to address another negative stereotype about "Frat Boys" - sexual assault. And by "address" I mean more than scary stories in a risk management presentation.

We need to remember that "Virtue" is also a Cardinal Principle.We are instructed to "behave with decency as befits the day." Even - perhaps especially - when alcohol is involved. Lets work toward actively promoting Virtue as a SigEp quality.

How shall we move toward a culture that does not accept this type of behavior? Can we consciously build an atmosphere in out chapters where "this is NOT what SigEp does" is communicated from the national level, to the local volunteer level, to chapter leadership, and to the members? I asked these questions at the Ft. Worth "Volunteer Drive-In Training" session last week. The response I got was "You are the word junky, How would you craft the message?"

Fair enough. If you complain you get to volunteer. So here is what I think:

That should be enough to get the discussion started. Lets hear from you now. Pro, con, too far out, not drastic enough? Have at it.

Here is a link to the article that had the video attached:
Fraternity Culture Linked To College Sexual Assault Problem | KPBS:

'via Blog this'
Posted by wordjunky at 10:48 AM
Lets Change Fraternity Culture Regarding Sexual Assault
2014-10-23T10:48:00-05:00
wordjunky
Culture|Frat boy image|Leadership|Opinion|Sexual assault|
Comments
Email ThisBlogThis!Share to TwitterShare to FacebookShare to Pinterest

Chapter Size and the "Dunbar Number"

The Limits of Friendship (in "The New Yorker")
BY MARIA KONNIKOVA

I saw this article in "The New Yorker" and it  got me thinking about chapter size and how 'effective' the college fraternity experience is. The Dunbar number? Generally speaking it is the number of people you call "friends". The article goes into it with more nuance, but lets call it 150 for now.

For years I have maintained (based only on anecdotal observation) that the minimum size of a good chapter is 50 men. Fewer that that and the chapter struggles to fill the operational positions for exec and the support areas.There is also difficulty managing finances (with the inevitable slow- and non-payers). and even fielding competitive intramural teams.

In reading this article I am led to consider whether there is an upward limit as well. Can you really have a full-on 'brotherhood' experience with more than 150 fellow chapter members? Perhaps there s a risk that a 150+ sized chapter will effectively split into multiple "sub-chapters" - groups who stick together and have independent agendas, even to the detriment of stated overall chapter goals and strategic vision. I know there are some 200+ member chapters. How do you keep it real?

Take a look at the article and share your experience and thoughts about it. Did you belong to a large "Sigma Phi Everyone" chapter, or a large chapter of another fraternity? How well did the experience work out. Was your chapter a smaller (100 or less) size? How effectively did you get to know all your brothers and did you work well together?

I'm not purposely leaving out sororities either. However, I suspect that there will be differences based on the presence or absence of a "Y" chromosome. I'd like to hear about it if only to show the contrast. Too many degrees of freedom and the examination gets unwieldy for this non-social scientist.

Lets hear your viewpoint. Comment either on the blog, Google+, or Facebook. I am hoping for some interesting discussion.

During the U.S. naval blockade of Cuba during the Cuban Missile Crisis, who was the Secretary of the Navy? A SigEp Patriot, that’s who!

In addition to that Brother, the SigEp Patriots Project (SPP) honors and remembers 19 SigEp Patriots from nearly as many chapters, including one brother who made the ultimate sacrifice during World War II.

In addition to the significant days in our history during this week, it is very important to remember that September is Suicide Awareness Month. Considering making a donation to ActiveHeroes.org where two-time Operation Iraqi Freedom Veteran and Michigan Eta Brother Captain Justin Fitch, U.S. Army is highlighted speaking to the fact that 22 veterans a day commit suicide.

Please note the upcoming memorial for the North Carolina Beta brother who recently passed away.

09 SEP 1942
Bernard Kumo entered the U.S. Navy on this date. We found his name in an edition of The Journal, however the national headquarters has “Kumko” as his last name. Bernard became a brother at Virginia Eta at the conclusion of his military service, and his return to the University of Virginia where he graduated with the Class of ‘44.

08 SEP 1944
World War II Veteran and Kansas Gamma Brother Second Lieutenant Raymond L. Childers, U.S. Army was released from the military on this date after about 15 months of service. 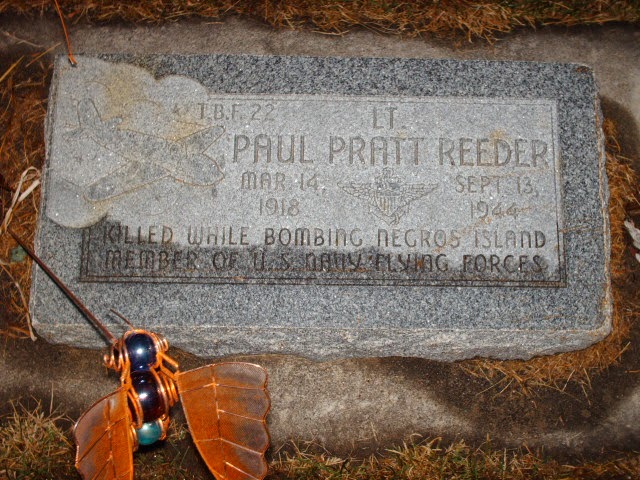 13 SEP 1944
World War II Veteran and UT Alpha Brother Lieutenant Paul Pratt Reeder, U.S. Navy made the ultimate sacrifice on this date. Brother Reeder was a pilot with VT-22 off of the USS Cowpens (CVL-25) when he was killed in action when his TBM-1C (Avenger) crashed during the bombing of Negros Island, The Philippines.

He entered the Naval Air Corps in OCT 1941, and was commissioned JUL 1942 in Corpus Christi, TX. Before he was killed Paul had participated in four major battles against the Japanese.

Brother Reeder was laid to rest with military honors at Smithfield City Cemetery in Smithfield, UT, and respect can be paid to him there at Plot C-41-10.